It’s called Mangoré, por Amor al Arte (Mangoré, for the Love of Art). It’s about the legendary Paraguayan guitarist and composer Agustín Barrios, also known as Agustín Barrios Mangoré. The movie should be out August, 2015.

Richard Yates was one one of the very first people to put quality guitar transcriptions online. Now he’s bundled them into a singe file for download.

While most of these have been on my site for years, many have been added only recently.

The file is a package of pdf files. You might (or not) need to upgrade to the latest Acrobat Reader to view it properly. It is about 30MB so I suggest saving the file and then opening it rather than opening it directly from your browser.

If you visit Richard’s main site — Yatesguitar.com — check out his playing of the famous Prelude in E Major by Bach. Beautiful! Stan M. Jay, owner of the Mandolin Brothers musical instrument store on Staten Island, which has been a pilgrimage destination for recording stars, collectors and other connoisseurs of the guitar, mandolin, banjo and ukulele for more than 40 years, died on Wednesday in Staten Island. He was 71.

The cause was Mantle cell lymphoma, his wife, Bea, said.

Mr. Jay played a virtuoso behind-the-scenes role in the musical lives of performers such as Joni Mitchell, Bob Dylan, Jimmy Buffett and Paul Simon — not as a performer, but as one of the country’s premier dealers and restorers of new and vintage fretted instruments.

The walls of his office at Mandolin Brothers, located in a tiny commercial strip, were papered with snapshots of him with those musicians and others, a collage of a Woodstock that might have been: Bruce Springsteen, Judy Collins, Lenny Kravitz, Sarah McLachlan, Sheryl Crow and Crosby, Stills and Nash, as well as celebrity guitar connoisseurs like Conan O’Brien and the filmmaker Christopher Guest. 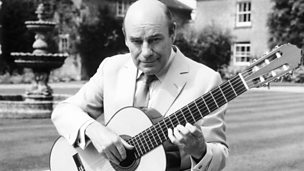 In the first of a series of Christmas specials, Sean Rafferty visits guitarist Julian Bream at home in Wiltshire to discuss a lifetime of music making.

At 80 years old, Julian Bream CBE has left a lasting legacy on the world of classical music, he popularised the lute and Elizabethan music and worked closely with composers such as Benjamin Britten, Michael Tippett and Malcolm Arnold to increase the guitar’s repertoire.

Julian talks candidly to Sean about his experiences as a child prodigy, forced to play the piano and cello because the guitar wasn’t considered a “serious” classical instrument and recounts his first experience, as a teenager, sitting in the Wigmore Hall with a pair of binoculars watching the hands of his hero Andres Segovia. Bream describes the anguish he felt while he locked himself in a shepherd’s hut in majorca for 10 days forcing himself to master Britten’s fiendishly difficult Nocturnal and how he offered Malcolm Arnold £30 to write him a concerto – a commission which was fulfilled in a matter of days.

Now at the end of his career and playing no more than a few notes on his guitar, this extended interview is a unique insight into one of Britain’s most important musical figures of the 20th Century.

The lovable Matanya Ophee talks about his life and work as a publisher of classical guitar music.

Musica Maestrale’s premier concert! For this special occasion, we will be joined by Adaiha Macadam-Somer (‘cello) and Noah Strick (violin), pictured left, two young, emerging stars in the San Francisco Bay Area early music scene. Both are alumni of the San Francisco Conservatory; Adaiha is a winner of the 2012 Voices of Music Young Artists’ Bach Competition (see video up, right), and Noah is the concertmaster of Berkeley Symphony and also plays with some very prestigious early music ensembles including Philharmonia Baroque Orchestra, American Bach Soloists, and Musica Angelica Baroque Orchestra. We are very fortunate to have them for their Portland debut!

This concert explores the sonata in 17th-century Italy. Wild and unrestrained, the music of this era has a flavor distinctly different from that of the later Baroque. Come experience the calculated madness of the music of Castello, Marini, and Stradella!

Here’s an excerpt from an interview with Hideki Yamaya, the group’s founder:

“The first concert is me and two young hotshot from the SF Bay area. We met at the Astoria Music Festival; they are Noah Strick who plays in a number of symphony orchestras in the Bay area including the Philharmonia Baroque, and Adahia Macadam-Somer is a wonderful cellist. So it will be the three of us, and we’ll be doing 17th-century Italian music, from the early Italian baroque, which is what I love to play the most so it’s kind of fitting that we start with that. We’re going to play a bunch of Castello, and a sonata by Stradella. It rocks pretty hard,” he said laughing.”

“So we’re dealing with some composers here who aren’t household names like your Handels or your Vivaldis,” I prodded him.

“Exactly. But the music nerds will certainly recognize some of the names. Expect some fireworks from it. These guys (Strick and Macadam-Somer) are up-and-coming young talent in the early music scene so it’ll be pretty exciting to have them up here.” Milos Karadaglic, in case you haven’t heard, is the hot new guitar player this year. By “hot,” I mean in the showbiz sense. Boffo. Big bank.

For one thing, he’s got Deutsche Grammophon behind him. It doesn’t get more prestigious than that. Milos signed with DG last summer. They’re sending him all over the world to promote his debut album with DG, Mediterraneo

And I don’t mind helping them out a little. Milos is a good player. (Yes, I call him just “Milos.” I can’t seem to remember “Karadaglic” very well. I notice that DG, too, has started calling him just “Milos” in their publicity. Good move.)

Milos is getting tremendous publicity. I first noticed the publicity campaign a few months ago when a well-written article about the guitarist came out in The Economist magazine, of all places.

Then I heard there was a TV commercial for his new recording on CBS TV. When’s the last time you saw a classical guitarist advertised on national network TV? Never. This is quite a push.

So I Googled around and he’s everywhere. Then I looked on YouTube to see what all the fuss is about. There I found video after video put out by Deutsche Grammophon pushing their new guitar star, but the videos were mostly hype. Lots of high-end, glamorous hype.

Which is perfectly understandable and acceptable, except I didn’t want to blog any of it. I wanted an honest, well-presented, and complete live performance – something that might be representative of what Milos is really about.

Yesterday I found one that wasn’t put out by DG. Although it’s mistitled – it says the piece is Granada by Albeniz – it’s still a nice video. It’s actually Milos playing Danza Espanola No. 5 by Granados, a great favorite with classical guitarists. It’s the fifth of the famous Twelve Spanish Dances for piano by Granados, published in 1890. The piece’s individual name is Andaluza, or sometimes it’s called Playera. (I don’t know why it has so many names.)

I heard a quote from Milos today: “I want people to fall in love with the guitar.”